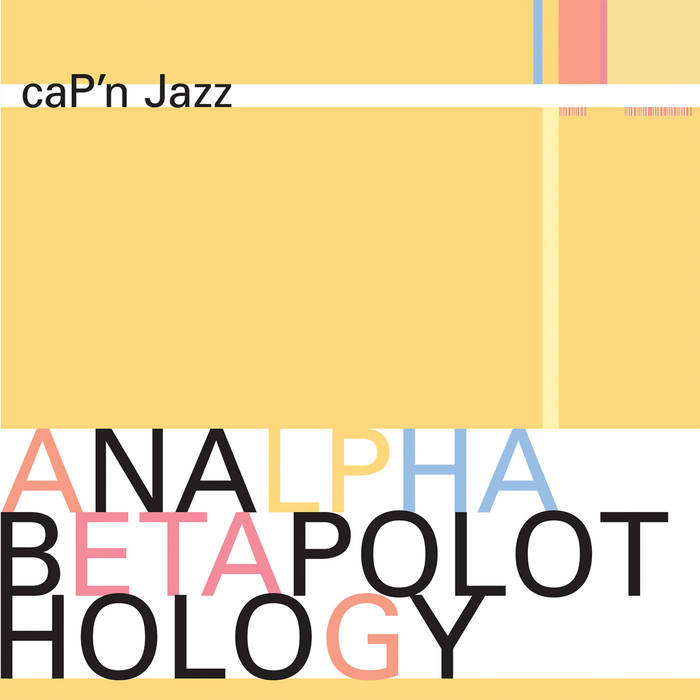 With only one full-length album to their name alongside a handful of singles and compilation tracks, CAP’N JAZZ left a longstanding impression and irrefutable influence on the region’s bohemian punk scene and unwittingly spawned a breeding ground for future scene stars such as the Promise Ring and Joan Of Arc. Analphabetapolothology (JT1036) compiles thirty-four songs that span the band’s entire history – six tracks of which are previously unreleased. Traces of their sonic fingerprint permeate hundreds of indie records released in their wake. This is why.

Tracks 1-12 originally released as “Burritos, inspiration point, card in the
spokes, automatic biographies, kites, kung fu, trophies, banana peels we’ve
slipped on and egg shells we’ve tippy toed over.” LP/CD on Mark Corley’s
Man With Gun Records. Recorded December 1994 by Casey Rice at Idful Music
Corporation. “Kitty, kitty cats” on Little League by Anja Westerweck.
Kevin J. Frank appears on the piano in Bluegrass. Track 6′s “I’m dying to
tell you I’m dying. I don’t need a reason” are Bob Nanna’s words. Refer to
Friction’s “Auburn” ca. 1994. FORGET WHO WE ARE. OLERUD. The last twp
songs ever written and polar opposites of each other. Written in the “C”
tuning now made infamous by the Promise Ring. Recorded live by Adam Jacob’s
Sonic Archives Mobile Recording Unit at the Fireside Bowl, July 7,
1995—their last show in Chicago. OOH DO I LOVE YOU. TAKE ON ME. TOKYO.
HEY MA . . . Except for Take on Me, none of these recordings were ever
considered finished or intended to be released. Take on Me was supposed to
be on some 80′s covers compilation which apparently never cane to fruition
and Hey Ma . . . Ended up on Matt Werth’s File 13 Records’ “We’ve Lost
Beauty” comp. It features Mike doing most of the singing while Tim
harmonica’d. Recorded March 1995 by Robroy Campbell and Kevin J. Frank on
Elliot Dicks’ old 8-track. Elliot then fixed up the sound a little in
August 1997, but there really wasn’t much he could do.

Bandcamp Daily  your guide to the world of Bandcamp

Featuring interviews with the mighty Haitus Kaiyote and genre-busting L'Rain.